Move over “Brad”−these girls are saving themselves. In his collection of mixed media prints entitled Chelsea Girls, New York based artist Marko Stout is showing young women in a bold new light. Although the work has an impressive artistic legacy from the Modernist Era, Stout updates the Lichtenstein and Warhol’s methods for the 21st century. His work depicts a jumble of slices of contemporary urban life through the female lens. Each brightly colored print features beautiful young women posed frontally from either the torso up or a facial shot only, reminiscent not only of prototypical fashion and beauty advertising but also of some of Roy Lichtenstein’s most famous pieces. But unlike Lichtenstein, Stout shows a broader spectrum of body types, not limited to those typically portrayed in the mass media. Rather than simply showing icy blonde Stepford-wives-to-be, Stout shows a slightly more diverse group of identities and ethnicities. While Lichtenstein shows women simply defying the conventions of the patriarchy by simply not doing what is expected of him, Stout’s figures are not reactionary but fierce, strong and complete individuals in and of themselves. The female figures do not exist to subvert feminine stereotypes but instead show women unyieldingly living their authentic lives. You will find no crying and drowning girls here; these women certainly do not adhere to the mainstream conventional ideals of female beauty, but rather show a rebellious streak that might as well be written into the DNA of the millennial generation. While the Lichtenstein figures stare coyly down or to the side, the main figure gaze directly at the viewer in many of the prints as if challenging them. They exude raw confidence-a much more empowering image. If Roy Lichtenstein was Post-Modernist tongue-in-cheek subversion, this is full out brazen audacity.  Stout’s work represents the powerful culmination of Post-Modern sentiments that were sown in the mid-20th century. 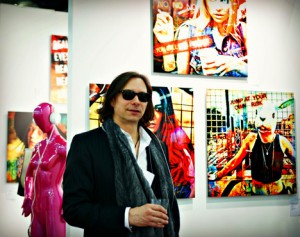 In the spirit of Andy Warhol, Stout’s work also makes use of a dazzling array of colors to create a heightened visual experience. The chromatic jumble is a technicolor ecstasy that visually mimics the hustle and bustle of New York City. Stout overlays his images with text, in the varied forms of neon lights, printed slogans and painted text reminiscent of graffiti. All of these words are pivotal for the artistic narrative in the same way that Lichtenstein used his speech bubbles, but Stout’s words are more organically incorporated into each piece. Stout uses catchy plays on words, poking fun at catchy modern mantras such as “Eat, sleep, rave repeat” and variations on “Keep Calm and Carry on”.  All the elements work together to create a buzzing and certain amount of chaos. Individually, the pieces are discordant and thought provoking; as a collection, they are dazzling. The amalgamation of various disparate pieces is vaguely Dadaist but captures the essence of the 21st century New York urban experience. The combination of images, colors and text is vibrant and somewhat disorienting, much like the city itself.

Massive protests erupt against the Iran Nuclear Deal in Westwood